If I talk about the best point and shoot camera under 500 dollars, I’ve had a lot of great responses from happy photographers, it seems that finding the most cost-effective way to save memories and create better artwork is a popular topic.

It is not necessary for spending thousands of bucks to capture some good photos and memories. Neither does a camera has to be enormously vast with multiple interchangeable lens kit with it. 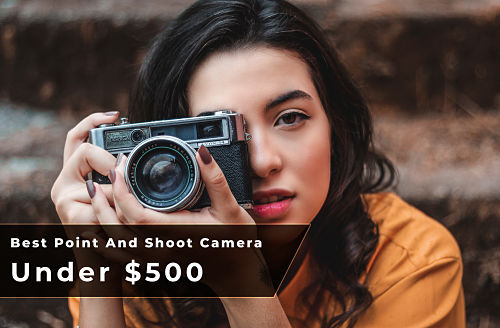 You can quickly gather great photos with decent image quality and similar features with point and shoot cameras by spending nothing more than $500. Unlike typical digital cameras, the improved cameras provide more advanced features including optical zoom, 4K image, and video quality, High resolution, and many more.

If you think that spending $500 on a digital camera is quite expensive, but you want advanced features at a low price, then you should check our list of best point and shoot cameras under $300. You can get an advanced compact digital camera within your budget. But you have to compromise in some features like a viewfinder, 4K Image, etc. 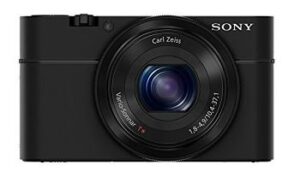 Sony made quite an intelligent decision when designing its new DSC-RX100. The slim body, fast shutter speed, pleasantly produced images allow you to get a pretty decent purchase on the camera. Sony DSC-RX100 is the best point and shoot camera under 500 USD in the category of the mirrorless camera.

Looking at its user-interface and the controllable nature, we can say that this camera is made ideally suited for any enthusiast photographer.

The most significant feature in the DSC-RX100 is its large sensor. The sensor allows maximum light to enter. Because of its compact size, you can carry it anywhere with you, even in your jacket pocket.

The cyber-shot captures the scene in only 2.1 seconds under normal light and 2.3 seconds if you are using the flash. It might be a must to use the flash in low-light, but on a bright day, the image results do not contain any noise.

The company claims that the camera can capture up to 240 shots on one charge, which is a pretty decent quantity for a point and zoom camera. However, if you are traveling or away for a long time, it is always a good idea to get some spare batteries with you. 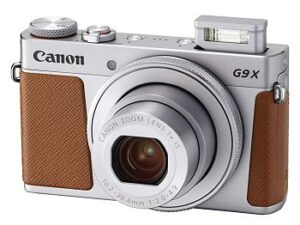 With Canon’s policy of constant changes in the designs and features to give the user its best, we have always turned towards it. After the success of its ancestor PowerShot G9 X, Canon came up with the updated model G9 X Mark II.

The new point and shoot camera have the same solid metal build with a textured grip for anyone to quickly get a hold of it. The pocket-sized camera has a pretty decent image quality in Raw that any professional photographer would approve of.

Upon checking its battery life, it was able to capture 355 shots in one charge and can also recharge with a USB portal. With its added features of face detection and tracking mode ability, it is easier for you to capture and focus on the subject automatically. For its advanced features, this could be your best point and shoot camera under $500. 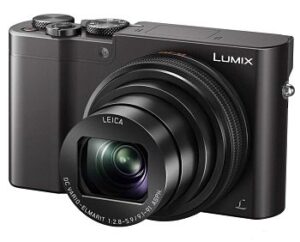 With the release of LUMIX ZS100 4K, Panasonic comes with good news for all the devotee photographers who enjoy capturing traveling memories and families. Unlike other compact digital cameras under $500, LUMIX ZS100 comes with a 10x lens offering 4K video features allowing it to deliver pretty decent image quality.

More enthusiast handlers appreciate it since it shows its best performance in manual mode. The sleek and slim pocketable camera produces good quality images in daylight with pleasant colors; however, in the dim light, we would recommend shooting in Raw.

With its Wi-Fi connectivity, one can share photos with smartphones and share it right away with friends and family.

The camera can be charged with a USB, though it is never a bad idea to keep a spare battery if you are traveling or shooting outdoor. 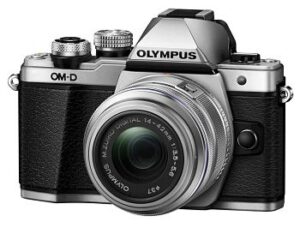 Olympus OM-D E-M10 Mark II mirrorless camera with all the features of its rivals but is available at a minimum cost. The camera is an updated version of its parent EM-10 with added features including a better resolution and image stabilization system.

Promising the same image quality, connectivity, and electronic viewfinder of an expensive DSLR in such a low price set OM-D apart from all its competitors. Though it doesn’t contain the feature of 4K video recording at this price, it still manages to produce HD quality.

If you are a dedicated photographer or a photography student who is willing to learn about handling a camera and manually operate it, this is the best mirrorless camera under 500 USD.

The Olympus OM-D E-M10 II is an inexpensive yet well-specified mirrorless camera whose design, image quality, performance, and feature set make it a compelling choice. If you are budget-minded photographers and seeking a compact ‘second camera’ who don’t want to skimp on features, then this point and shoot camera is the best choice to buy under 500 dollars. 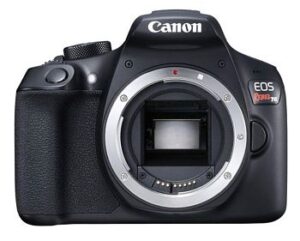 Canon EOS Rebel T6, the improved successor of EOS T5, comes with a somewhat updated processor and has changed in the specifications as well.

The light-weight and slightly smaller-bodied camera are natural to hold due to its textured grip. It contains a fixed LCD with which one can see the visuals in the sun by increasing the brightness.

This compact DSLR comes with an APS-C sensor and reduces the noise to a minimum in images. After analyzing multiple shots taken by Rebel T6, We can say that the image quality of vibrant colors and faultless skin tones.

The video quality of the rebel is way better than any other Point and Shoot camera and steps up from the list. The camera allows using different modes for autofocusing, including FlexiZone and a Quick mode. 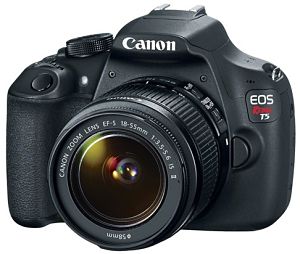 While it doesn’t stand out particularly, the Canon EOS Rebel T5 does produce beautiful photos typical of its price class, its performance isn’t bad, and it has an attractive design. With the T5, Canon brings incremental improvements in photo and video resolution, but we ache for more modern features such as Wi-Fi capability. 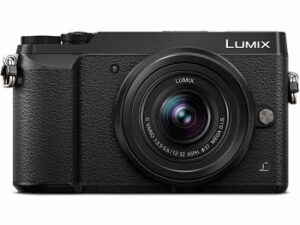 Another Panasonic best point and shoot camera under $500 is the Lumix GX85. The name might sound expensive, but the camera is not.

The images that are produced by the camera are spot on. Not only that, but it also offers 4K video and photo resolution leaving the user amazed by the carried details and high quality.

Panasonic has worked on minimizing the shutter speed and the sound produced as well. Looking at the compact size can be a surprise to say that it contains a 12-32mm lens.

Though using other compactable lenses is also a good option if you want to make the best out of the camera. This camera is suited best for indoor shoots with the ones taking less time due to its battery life.

A DSLR within $500 that too manufactured by the best camera producing company Nikon?

Yes, you heard it right. It might be shocking for some, but Nikon has come up with entry-level D3500 and is made it to the list of ideal first cameras for new photographers.

They are making it possible for wildlife photographers or enthusiasts to capture the images of their dreams with a 24.2MP sensor, four image processors, and an 18-55mm lens. The camera lacks a flippy touch screen which might be a bummer for photographers and vloggers.

The camera has a built-in mic which produces outstanding sound quality approved for YouTube videos as well. Nikon has added the image stabilization system and improved low-light performance to help you capture in fields with no worry of images turning out to be blurry or noisy.

Still not figure out which camera you should buy!

Must Read: Beginner’s Guide of Point And Shoot Camera to Expert Level 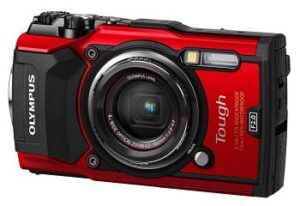 Olympus Tough TG-5 is kept on our list of best point and shoot cameras under $500 is the tough, waterproof, durable and rugged digital camera. Since years Olympus has continued to produce fantastic cameras with all the features for a reasonable cost and TF-5 is one of them.

Being waterproof and crushproof it verifies to be ideal for taking to any adventure whether you want to record in the mountains or under the water. Along with decent image quality, you can even shoot HD quality slow-motion videos or time lapses which are a treat for surfers.

The image can produce raw photos that can be edited in any editor later according to your needs. One can easily capture 340 shots on a single charge and transfer them on your smartphones with minimum effort. 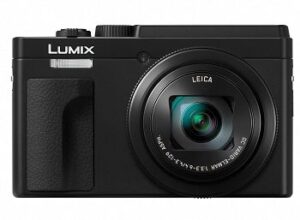 The Panasonic newest ZS80 is an update of the previously launched LUMIX ZS70. Both the point and shoot camera have some similar features with a significant improvement in the viewfinder and Venus processing engine.

Along with autofocus, you can also focus on using the touchscreen. The Bluetooth and WIFI connectivity is available for using the camera remotely. The travel zoom compact camera provides you with the 4K video quality.

The camera processes excellent popularity among travelers who avoid carrying huge DSLR or the aggravation of changing lenses and modes but also want to capture the memories and moments in good quality. The flipping screen makes it the best choice for people who love recording themselves or vlog.

With the respectable battery life, you can capture 380 photos on one recharge and use the camera for travel and long shoots. 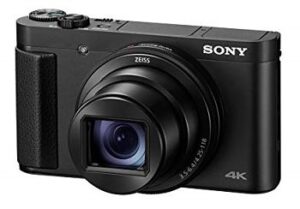 Having all the features of a point and shoot camera on the one hand that too at an amazing price under $500 is the best deal you could get. Sony DSC-HX99 makes it happen for you.

The smallest travel zoom compact offers a broad zoom range and lets you take pictures from any distance at the resolution of 1440 mm. The camera has additional features such as zoom assist for framing and Optical steady shot for shake reduction and image stabilization.

The DSC-HX99 is highly recommended for vloggers because of its 3.0” touchscreen tilting screen that can flip for selfies and groupies. The best part about the camera is its 4k video and image resolution that can even come handy when you are shooting in low-light.

We recommend the new Sony point and shoot camera. Especially for social media posters, by which you can instantly connect and transfer your high-quality photos and videos to smartphones because of its Wi-Fi and Bluetooth compatibility.

Smartphones threatened point and shoot camera business in the past few decades. However, to compete, it has evolved in a surprising and promising way by introducing cameras with the latest specifications.

For a beginner or a newbie, the camera industry can be confusing. So many companies are producing several cameras every year with unlimited features. But if you know why you are getting your camera and for what purpose you want to use it, you can easily make your choice.

To make things simpler for you, we have reviewed all the cameras and made a buying guide and specifications you must look for in a camera according to your needs. 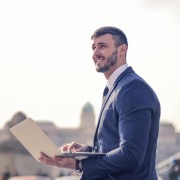 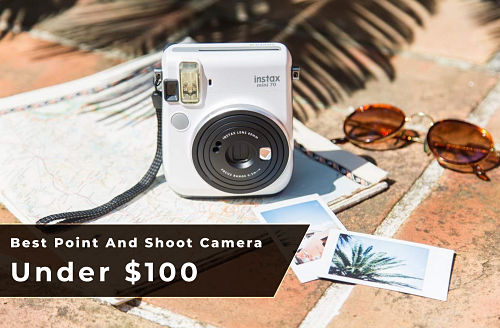 Welcome to the Camera Suggest.

The Camera Suggest the leading faithful site for innovation and the associated itself that focused on helping consumers to get best under budget from the things they love doing with cameras, Lenses and accessories, etc.

It is overseen by a group of passionate camera experts who test and gather the rundown of best Cameras in different price ranges and for various kinds of requirements.

Check out our About us page to know how we pick a camera for our camera buying guides.

You have Successfully Subscribed!